When multiple people are working on the same Terraform project from different locations simultaneously, it is important to handle the infrastructure code and project state correctly to avoid overwriting errors. The solution is to store the state remotely instead of locally. A remote system is available to all members of your team, and it is possible for them to lock the state while they’re working.

One such remote backend is pg, which stores the state in a PostgreSQL database. During the course of this tutorial, you’ll use it with a DigitalOcean Managed Database to ensure data availability.

Terraform also supports the official, managed cloud offering by HashiCorp called Terraform Cloud—a proprietary app that syncs your team’s work in one place and offers a user interface for configuration and management.

In this tutorial, you’ll create an organization in Terraform Cloud to which you’ll connect your project. You’ll then use your organization to set up workspaces and resources. You will store your state in the managed cloud so it is always available. You’ll also set up the pg backend with an accompanying managed PostgreSQL database.

Note: We have specifically tested this tutorial using Terraform 0.13.

In this step, you’ll create a project that deploys a Droplet, but instead of storing the state locally, you’ll use Terraform Cloud as the backend with the remote provider. This entails creating the organization and workspace in Terraform Cloud, writing the infrastructure code, and planning it.

Start off by heading over to Terraform Cloud and logging in. If you haven’t yet created an organization, it will prompt you to do so.

Enter an organization name of your choosing and remember that it must be unique among all names in Terraform Cloud. You’ll receive an error if the name already exists. The email address should already be filled in with the address of your account. Once you’re finished, click the Create organization button to continue.

It will then ask you to select the type of workspace. 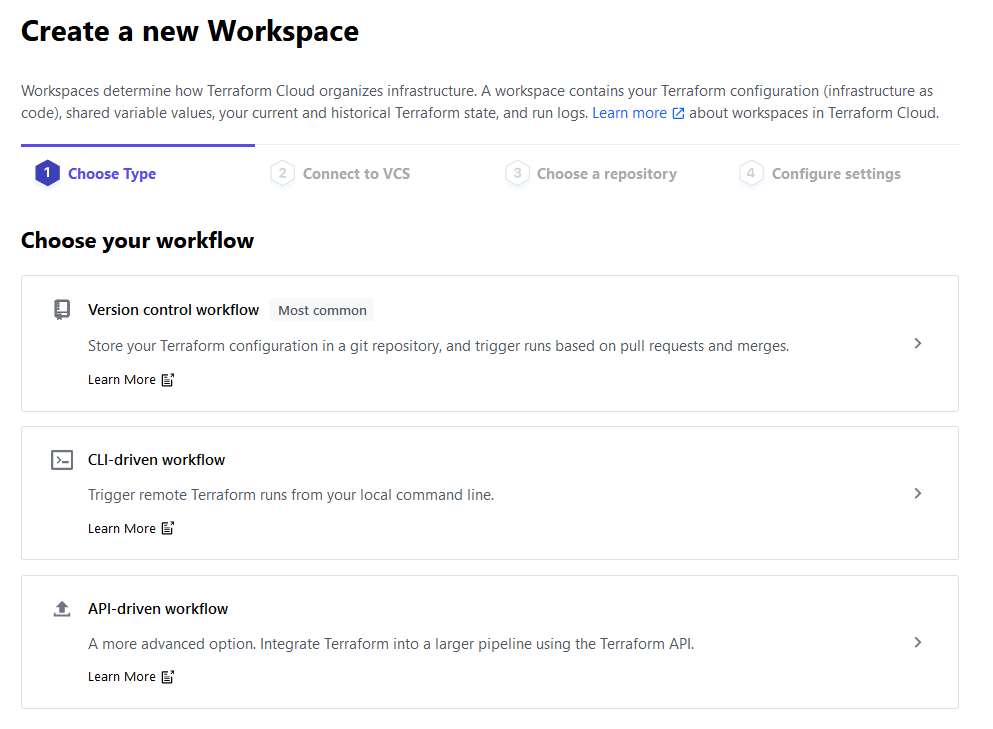 Since you’ll interface with Terraform Cloud using the command line, click the CLI-driven workflow option. Then, input a name for your workspace.

Type in a workspace name of your choosing (we’ll call it sammy), then click Create workspace to finalize the organization creation process. It will then direct you to a workspace settings page. 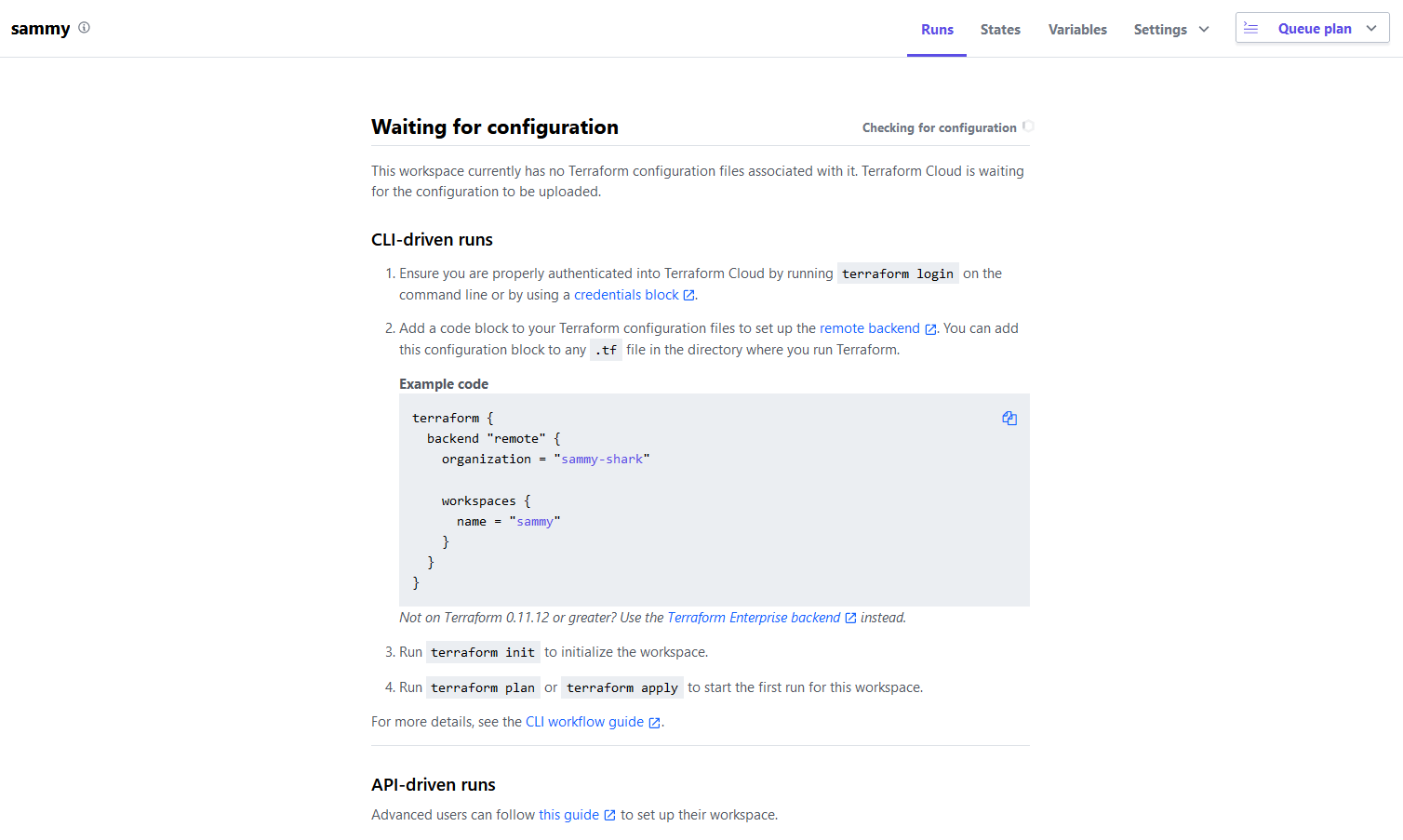 You’ve now created your workspace, which is a part of your organization. Since you just created it, your workspace contains no infrastructure code. In the central part of the interface, Terraform Cloud gives you starting instructions for connecting to this workspace.

Before connecting to it, you’ll need to configure the version of Terraform that the cloud will use to execute your commands. To set it, click the Settings dropdown in the upper-right corner and select General from the list. When the page opens, navigate to the Terraform Version dropdown and select 0.13.1 (for this tutorial).

Then, click the Save settings button to save the changes.

To connect your project to your organization and workspace, you’ll first need to log in using the command line. Before you run the command, navigate to the tokens page to create a new access token for your server, which will provide access to your account. You’ll receive a prompt to create an API token.

The default description is fine, so click Create API token to create it.

Click the token value, or the icon after it, to copy the API token. You’ll use this token to connect your project to your Terraform Cloud account.

In the command line, run the following command to log in:

Terraform is warning you that the token will be stored locally. Enter yes when it prompts you:

Paste in the token you’ve copied and confirm with ENTER. Terraform will show a success message:

Setting Up the Project

To set up your project, you’ll need to:

You’ll store the provider and module requirements specifications in a file named provider.tf. Create and open it for editing by running:

Here, you first specify your Terraform version. Then, you specify the digitalocean provider as required and set the backend to remote.

Its hostname is set to app.terraform.io, which is the address of Terraform Cloud. For the organization and workspaces.name, replace the highlighted values with the names you specified.

Next, you define a variable called do_token, which you pass to the digitalocean provider created after it. You’ve now configured your project to connect to your organization, so save and close the file.

Initialize your project with the following command:

The output will be similar to this:

Next, define the Droplet in a file called droplets.tf. Create and open it for editing by running:

This code will deploy a Droplet called web-1 in the fra1 region, running Ubuntu 18.04 on 1GB RAM and one CPU core. That is all you need to define, so save and close the file.

What’s left to define are the variable values. The remote provider does not support passing in values to variables through the command line, so you’ll have to pass them in using variable files or set them in Terraform Cloud. Terraform reads variable values from files with a filename ending in .auto.tfvars. Create and open a file called vars.auto.tfvars for editing, in which you’ll define the do_token variable:

When you’re done, save and close the file. Terraform will automatically read this file when planning actions.

Your project is now complete and set up to use Terraform Cloud as its backend. You’ll now plan and apply the Droplet and review how that reflects in the Cloud app.

Since you haven’t yet planned or applied your project, the workspace in Terraform Cloud is currently empty. You can try applying the project by running the following command to update it:

You’ll notice that the output is different from when you use local as your backend:

When using the remote backend, Terraform is not planning or applying configuration from the local machine. Instead, it delegates those tasks to the cloud, and only streams the output to the console in real time.

Enter yes when prompted. Terraform will soon finish applying the configuration, and you can navigate to the workspace on the Terraform Cloud website to find that it has applied a new action.

You can now destroy the deployed resources by running the following:

In this section, you’ve connected your project to Terraform Cloud. You’ll now use another backend, pg, which stores the state in a PostgreSQL database.

In this section, you’ll set up a project that deploys a Droplet, much like the the previous step. This time, however, you’ll store the state in a DigitalOcean Managed PostgreSQL database using the pg provider. This provider supports state locking, so the state won’t ever be overwritten by two or more changes happening at the same time.

Start by creating a directory named terraform-team-pg in which you’ll store the project:

Like the previous section, you’ll first define the provider and then pass in the connection string for the database and the digitalocean module. Create and open provider.tf for editing:

Remember to replace your_db_connection_string with the connection string for your managed database from your DigitalOcean Control Panel. Then save and close the file.

Warning: To continue, in the Settings of your database, make sure you have the IP address of the machine from which you’re running Terraform on an allowlist.

Initialize the project by running:

The output will be similar to the following:

Terraform successfully initialized the backend; meaning it connected to the database. However, it complains about not having a workspace, since it does not create one during initialization. To resolve this, create a default workspace and switch to it by running:

The output will be the following:

Since the Droplet definition is the same as in the previous project, you can copy it over by running:

You’ll need your DigitalOcean token in an environment variable. Create one, replacing your_do_token with your token:

To check that the connection to the database is working, try planning the configuration:

The output will be similar to the following:

Terraform reported no errors and planned out the actions as usual. It successfully connected to your PostgreSQL database and stored its state. Multiple people can now work on this simultaneously with the project remaining synchronized.

In this tutorial, you’ve used two different backends: Terraform Cloud, which is HashiCorp’s managed cloud offering for Terraform; and pg, which allows you to store the project’s state in a PostgreSQL database. You used a managed PostgreSQL database from DigitalOcean, which you can provision and use with Terraform within minutes.

For more information about the features of Terraform Cloud, visit the official docs.

To learn more about using Terraform, check out our series on How To Manage Infrastructure with Terraform.