The author selected Wikimedia Foundation Inc. to receive a donation as part of the Write for DOnations program.

Seafile is an open-source, self-hosted, file synchronization and sharing platform. Users can store and optionally encrypt data on their own servers with storage space as the only limitation. With Seafile you can share files and folders using cross-platform syncing and password-protected links to files with expiration dates. A file-versioning feature means that users can restore deleted and modified files or folders.

In this tutorial you will install and configure Seafile on an Ubuntu 18.04 server. You will use MySQL to store data for the different components of Seafile, and Apache as the proxy server to handle the web traffic. After completing this tutorial you will be able to use the web interface to access Seafile from desktop or mobile clients, allowing you to sync and share your files with other users or groups on the server or with the public.

Before you begin this guide, you'll need the following:

Each of these components stores its data separately in its own database. In this step you will create the three MySQL databases and a user before proceeding to set up the server.

First, log in to the server using SSH with your username and IP address:

Connect to the MySQL database server as administrator (root):

At the MySQL prompt, use the following SQL command to create the database user:

Next, you will create the following databases to store the data of the three Seafile components:

At the MySQL prompt, create your databases:

Then, grant all privileges to the Seafile database user to access and make changes in these databases:

Now that you have created a user and the databases required to store the data for each of the Seafile components, you will install dependencies to download the Seafile server package.

Some parts of Seafile are written in Python and therefore require additional Python modules and programs to work. In this step, you will install these required dependencies before downloading and extracting the Seafile server package.

To install the dependencies using apt run the following command:

The python-setuptools and python-pip dependencies oversee installing and managing Python packages. The python-urllib3 and python-requests packages make requests to websites. Finally, the python-mysqldb is a library for using MySQL from Python and ffmpeg handles multimedia files.

The pillow and moviepy Python modules required by Seafile are not available in the Ubuntu package repository. You will install them manually using pip:

NOTE: You will also need to upgrade these packages manually when new versions are released. The command to upgrade is:

Now that you have installed the necessary dependencies, you can download the Seafile server package.

Seafile creates additional directories during setup. To keep them all organized, create a new directory and change into it:

You can now download the latest version (6.3.4 as of this writing) of the Seafile server from the website by running the following command:

Seafile distributes the download as a compressed tar archive, which means you will need to extract it before proceeding. Extract the archive using tar:

Now change into the extracted directory:

Seafile needs some information about your setup before you start the services for the first time. This includes details like the domain name, the database configuration, and the path where it will store data. To initiate the series of question prompts to provide this information, you can run the script setup_seafile_mysql.sh, which is included in the archive you extracted in the previous step.

The script will now prompt you with a series of questions. Wherever defaults are mentioned, pressing the ENTER key will use that value.

This tutorial uses Seafile as the server name, but you can change it if necessary.

Enter the domain name for this Seafile instance.

For Question 3 press ENTER to accept the default value. If you have set up external storage, for example, using NFS or block storage, you will need to specify the path to that location here instead.

For Question 4 press ENTER to accept the default value.

The next prompt allows you to confirm the database configuration. You can create new databases or use existing databases for setup. For this tutorial you have created the necessary databases in Step 1, so select option 2 here.

Questions 6–9 relate to the MySQL database server. You will only need to provide the username and password of the mysql user that you created in Step 1. Press ENTER to accept the default values for host and port.

After providing the password, the script will request the names of the Seafile databases. Use ccnet-db, seafile-db, and seahub-db for this tutorial. The script will then verify if there is a successful connection to the databases before proceeding to display a summary of the initial configuration.

As you will be running Seafile behind Apache, opening ports 8082 and 8000 in the firewall is not necessary, so you can ignore this part of the output.

You have completed the initial configuration of the server. In the next step, you will configure the Apache web server before starting the Seafile services.

In this step, you will configure the Apache web server to forward all requests to Seafile. Using Apache in this manner allows you to use a URL without a port number, enable HTTPS connections to Seafile, and make use of the caching functionality that Apache provides for better performance.

To begin forwarding requests, you will need to enable the proxy_http module in the Apache configuration. This module provides features for proxying HTTP and HTTPS requests. The following command will enable the module:

Note: The Apache rewrite and ssl modules are also required for this setup. You have already enabled these modules as part of configuring Let's Encrypt in the second Apache tutorial listed in the prerequisites section.

Next, update the virtual host configuration of example.com to forward requests to the Seafile file server and to the Seahub web interface.

Open the configuration file in a text editor:

The lines from ServerAdmin to SSLCertificateKeyFile are part of the initial Apache and Let's Encrypt configuration that you set up as part of the prerequisite. Add the highlighted content, beginning at Alias and ending with the ProxyPassReverse directive:

The Alias directive maps the URL path example.com/media to a local path in the file system that Seafile uses. The following Location directive enables access to content in this directory. The ProxyPass and ProxyPassReverse directives make Apache act as a reverse proxy for this host, forwarding requests to / and /seafhttp to the Seafile web interface and file server running on local host ports 8000 and 8082 respectively. The RewriteRule directive passes all requests to /seafhttp unchanged and stops processing further rules ([QSA,L]).

Save and exit the file.

Test if there are any syntax errors in the virtual host configuration:

If it reports Syntax OK, then there are no issues with your configuration. Restart Apache for the changes to take effect:

You have now configured Apache to act as a reverse proxy for the Seafile file server and Seahub. Next, you will update the URLs in Seafile's configuration before starting the services.

As you are now using Apache to proxy all requests to Seafile, you will need to update the URLs in Seafile's configuration files in the conf directory using a text editor before you start the Seafile service.

Open ccnet.conf in a text editor:

Modify the SERVICE_URL setting in the file to point to the new HTTPS URL without the port number, for example:

Save and exit the file once you have added the content.

You can now add a FILE_SERVER_ROOT setting in the file to specify the path where the file server is listening for file uploads and downloads:

Now you can start the Seafile service and the Seahub interface:

As this is the first time you have started the Seahub service, it will prompt you to create an admin account. Enter a valid email address and a password for this admin user:

Open https://example.com in a web browser and log in using your Seafile admin email address and password. 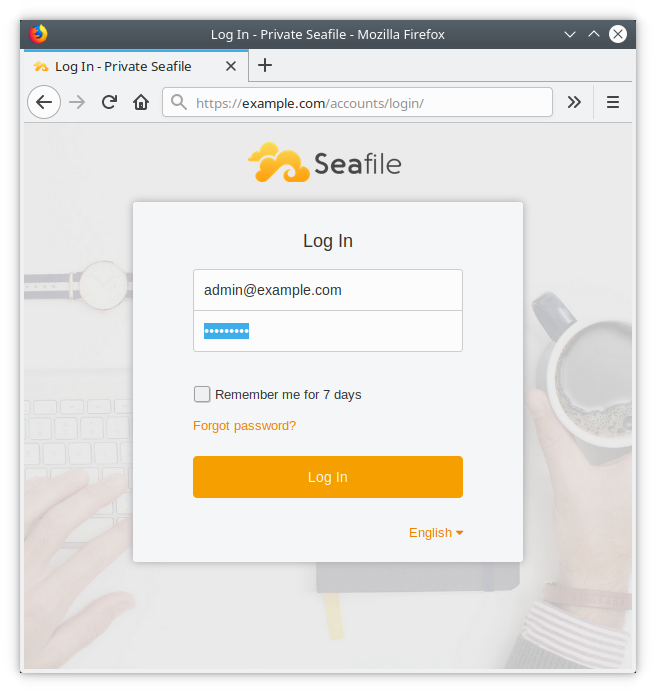 Now that you have verified the web interface is working correctly, you can enable these services to start automatically at system boot in the next step.

Step 6 — Enabling the Seafile Server to Start at System Boot

To enable the file server and the web interface to start automatically at boot, you can create the respective systemd service files and activate them.

Create a systemd service file for the Seafile file server:

Create a systemd service file for the Seahub web interface:

You can learn more about systemd unit files in the Understanding Systemd Units and Unit Files tutorial.

Finally, to enable both the Seafile and Seahub services to start automatically at boot, run the following commands:

When the server is rebooted, Seafile will start automatically.

At this point, you have completed setting up the server, and can now test each of the services.

In this step, you will test the file synchronization and sharing functionality of the server you have set up and ensure they are working correctly. To do this, you will need to install the Seafile client program on a separate computer and/or a mobile device.

Visit the download page on the Seafile website and follow the instructions to install the latest version of the program on your computer. Seafile clients are available for the various distributions of Linux (Ubuntu, Debian, Fedora, Centos/RHEL, Arch Linux), MacOS, and Windows. Mobile clients are available for Android and iPhone/iPad devices from the respective app stores.

Once you have installed the Seafile client, you can test the file synchronization and sharing functionality.

Open the Seafile client program on your computer or device. Accept the default location for the Seafile folder and click Next.

At the home page, right click on My Library and click Sync this library. Accept the default value for the location on your computer or device. 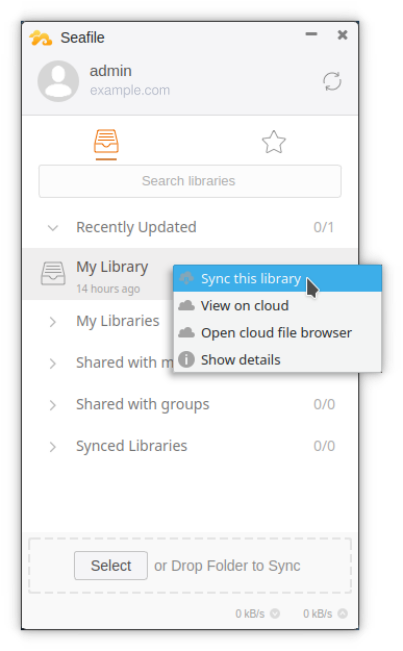 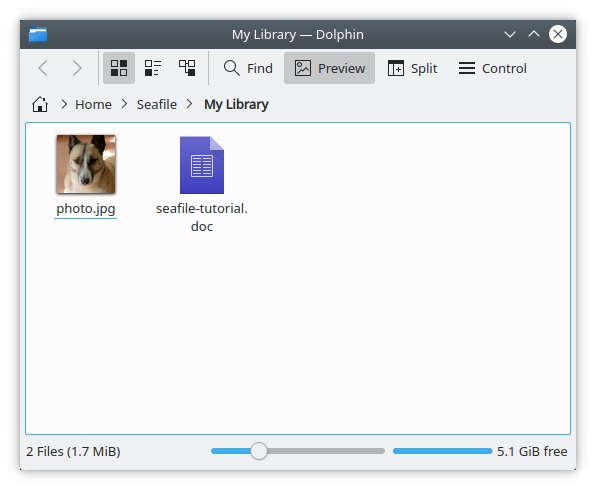 Now, log in to the web interface at https://example.com and verify that your file is present on the server. 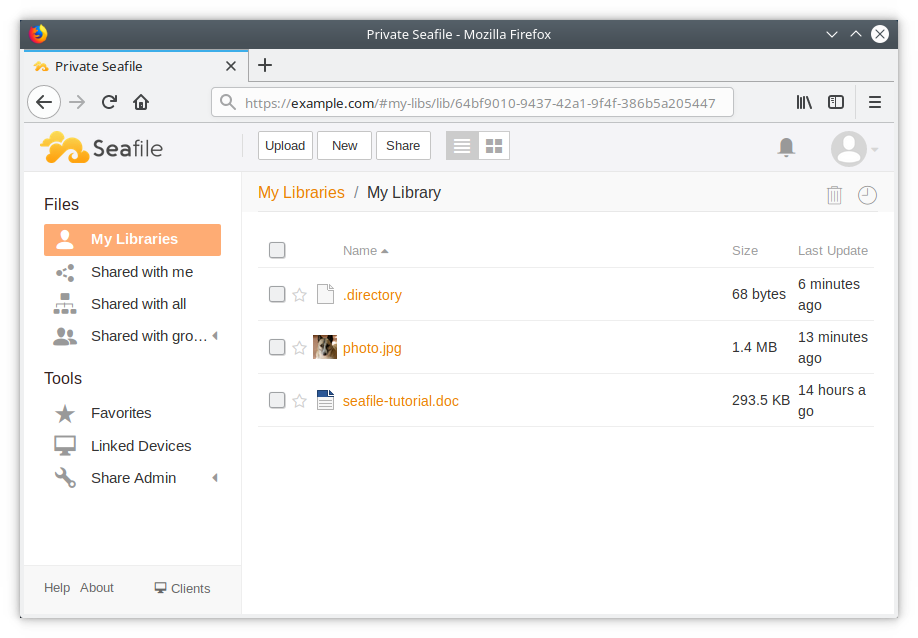 You have verified that the file synchronization is working correctly and that you can use Seafile to sync and share files and folders from multiple devices.

In this tutorial you set up a private instance of a Seafile server. Now you can start using the server to synchronize files, add users and groups, and share files between them or with the public without relying on an external service.

When a new release of the server is available, please consult the upgrade section of the manual for steps to perform an upgrade.