Along with tracing and logging, monitoring and alerting are essential components of a Kubernetes observability stack. Setting up monitoring for your DigitalOcean Kubernetes cluster allows you to track your resource usage and analyze and debug application errors.

A monitoring system usually consists of a time-series database that houses metric data and a visualization layer. In addition, an alerting layer creates and manages alerts, handing them off to integrations and external services as necessary. Finally, one or more components generate or expose the metric data that will be stored, visualized, and processed for alerts by the stack.

One popular monitoring solution is the open-source Prometheus, Grafana, and Alertmanager stack, deployed alongside kube-state-metrics and node_exporter to expose cluster-level Kubernetes object metrics as well as machine-level metrics like CPU and memory usage.

Rolling out this monitoring stack on a Kubernetes cluster requires configuring individual components, manifests, Prometheus metrics, and Grafana dashboards, which can take some time. The DigitalOcean Kubernetes Cluster Monitoring Quickstart, released by the DigitalOcean Community Developer Education team, contains fully defined manifests for a Prometheus-Grafana-Alertmanager cluster monitoring stack, as well as a set of preconfigured alerts and Grafana dashboards. It can help you get up and running quickly, and forms a solid foundation from which to build your observability stack.

In this tutorial, we'll deploy this preconfigured stack on DigitalOcean Kubernetes, access the Prometheus, Grafana, and Alertmanager interfaces, and describe how to customize it.

Before you begin, you'll need a DigitalOcean Kubernetes cluster available to you, and the following tools installed in your local development environment:

Then, navigate into the repo:

You should see the following directory structure:

The manifest directory contains Kubernetes manifests for all of the monitoring stack components, including Service Accounts, Deployments, StatefulSets, ConfigMaps, etc. To learn more about these manifest files and how to configure them, skip ahead to Configuring the Monitoring Stack.

If you just want to get things up and running, begin by setting the APP_INSTANCE_NAME and NAMESPACE environment variables, which will be used to configure a unique name for the stack's components and configure the Namespace into which the stack will be deployed:

In this case, the NAMESPACE environment variable was set to sammy. Throughout the rest of the tutorial we'll assume that NAMESPACE has been set to default.

Now, use the base64 command to base64-encode a secure Grafana password. Be sure to substitute a password of your choosing for your_grafana_password:

If you're using macOS, you can substitute the openssl base64 command which comes installed by default.

By default, along with scraping metrics generated by node-exporter, kube-state-metrics, and the other components listed above, Prometheus will be configured to scrape metrics from the following components:

To learn more about configuring these components and Prometheus scraping jobs, skip ahead to Configuring the Monitoring Stack. We'll now substitute the environment variables defined in the previous step into the repo's manifest files, and concatenate the individual manifests into a single master file.

Begin by using awk and envsubst to fill in the APP_INSTANCE_NAME, NAMESPACE, and GRAFANA_GENERATED_PASSWORD variables in the repo's manifest files. After substituting in the variable values, the files will be combined and saved into a master manifest file called sammy-cluster-monitoring_manifest.yaml.

You should consider storing this file in version control so that you can track changes to the monitoring stack and roll back to previous versions. If you do this, be sure to scrub the admin-password variable from the file so that you don't check your Grafana password into version control.

Now that you've generated the master manifest file, use kubectl apply -f to apply the manifest and create the stack in the Namespace you configured:

You should see output similar to the following:

You can track the stack’s deployment progress using kubectl get all. Once all of the stack components are RUNNING, you can access the preconfigured Grafana dashboards through the Grafana web interface.

The Grafana Service manifest exposes Grafana as a ClusterIP Service, which means that it's only accessible via a cluster-internal IP address. To access Grafana outside of your Kubernetes cluster, you can either use kubectl patch to update the Service in-place to a public-facing type like NodePort or LoadBalancer, or kubectl port-forward to forward a local port to a Grafana Pod port. In this tutorial we'll forward ports, so you can skip ahead to Forwarding a Local Port to Access the Grafana Service. The following section on exposing Grafana externally is included for reference purposes.

If you'd like to create a DigitalOcean Load Balancer for Grafana with an external public IP, use kubectl patch to update the existing Grafana Service in-place to the LoadBalancer Service type:

The kubectl patch command allows you to update Kubernetes objects in-place to make changes without having to re-deploy the objects. You can also modify the master manifest file directly, adding a type: LoadBalancer parameter to the Grafana Service spec. To learn more about kubectl patch and Kubernetes Service types, you can consult the Update API Objects in Place Using kubectl patch and Services resources in the official Kubernetes docs.

After running the above command, you should see the following:

It may take several minutes to create the Load Balancer and assign it a public IP. You can track its progress using the following command with the -w flag to watch for changes:

Once the DigitalOcean Load Balancer has been created and assigned an external IP address, you can fetch its external IP using the following commands:

You can now access the Grafana UI by navigating to http://SERVICE_IP/.

Forwarding a Local Port to Access the Grafana Service

If you don't want to expose the Grafana Service externally, you can also forward local port 3000 into the cluster directly to a Grafana Pod using kubectl port-forward.

This will forward local port 3000 to containerPort 3000 of the Grafana Pod sammy-cluster-monitoring-grafana-0. To learn more about forwarding ports into a Kubernetes cluster, consult Use Port Forwarding to Access Applications in a Cluster.

Visit http://localhost:3000 in your web browser. You should see the following Grafana login page:

To log in, use the default username admin (if you haven't modified the admin-user parameter), and the password you configured in Step 1.

You'll be brought to the following Home Dashboard:

In the left-hand navigation bar, select the Dashboards button, then click on Manage: 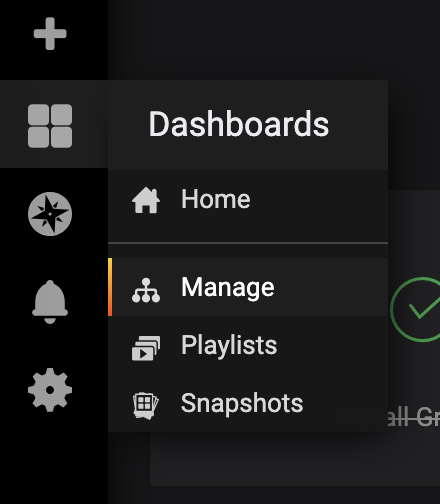 You'll be brought to the following dashboard management interface, which lists the dashboards configured in the dashboards-configmap.yaml manifest: 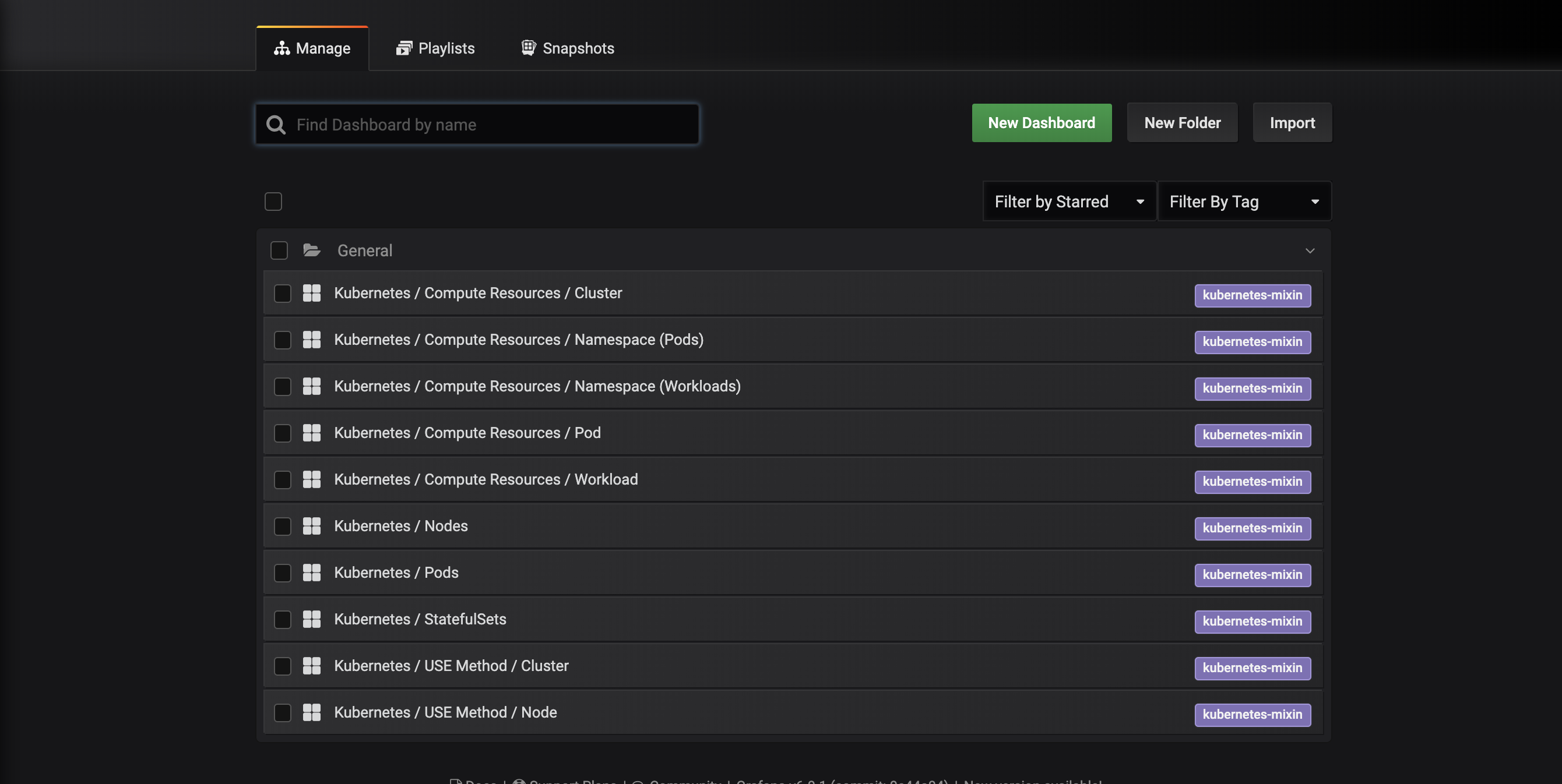 Click in to the Kubernetes / Nodes dashboard, which visualizes CPU, memory, disk, and network usage for a given node: 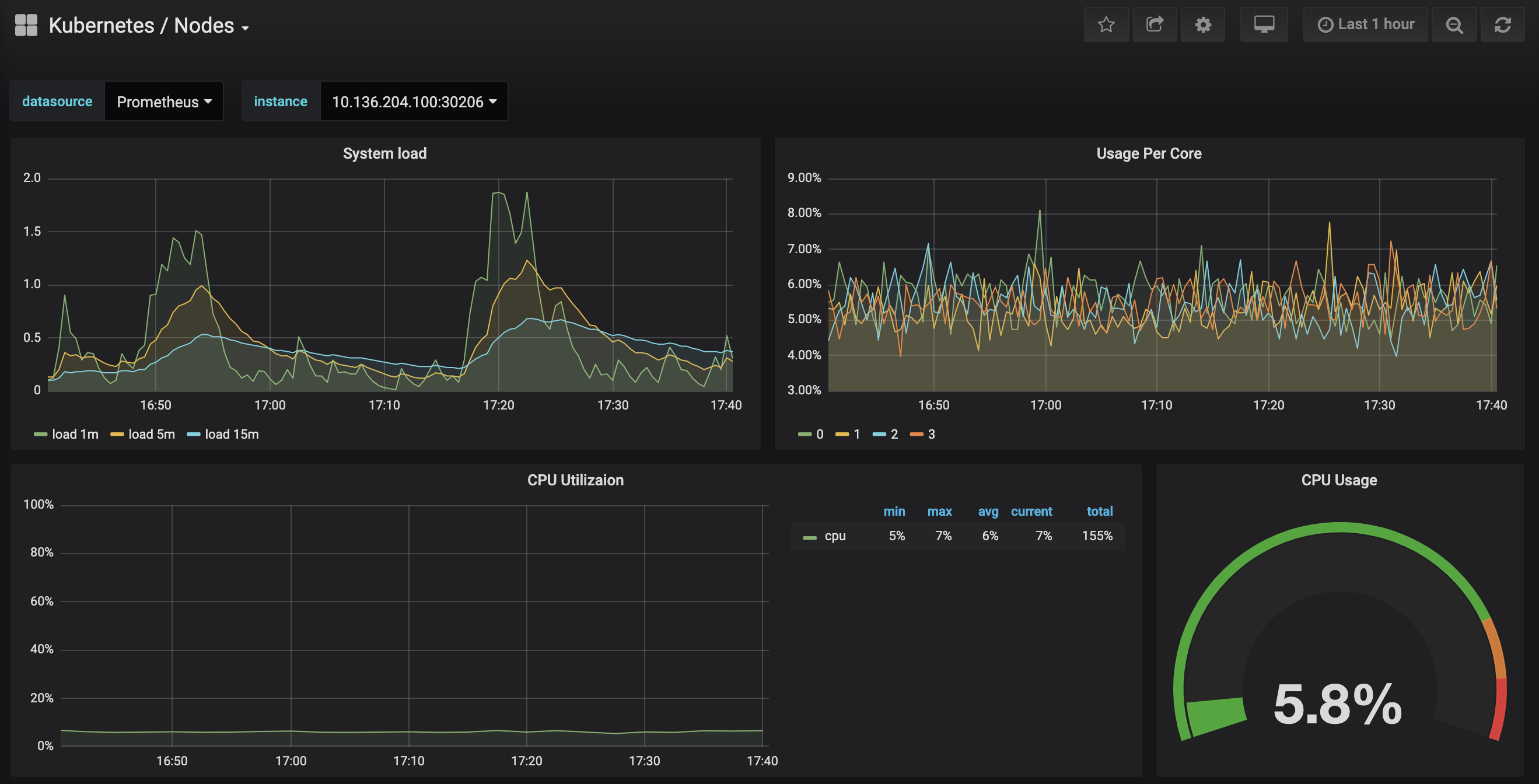 Describing how to use these dashboards is outside of this tutorial’s scope, but you can consult the following resources to learn more:

In the next step, we'll follow a similar process to connect to and explore the Prometheus monitoring system.

To connect to the Prometheus Pods, we can use kubectl port-forward to forward a local port. If you’re done exploring Grafana, you can close the port-forward tunnel by hitting CTRL-C. Alternatively, you can open a new shell and create a new port-forward connection.

Begin by listing running Pods in the default namespace:

You should see the following Pods:

We are going to forward local port 9090 to port 9090 of the sammy-cluster-monitoring-prometheus-0 Pod:

This indicates that local port 9090 is being forwarded successfully to the Prometheus Pod.

Visit http://localhost:9090 in your web browser. You should see the following Prometheus Graph page: 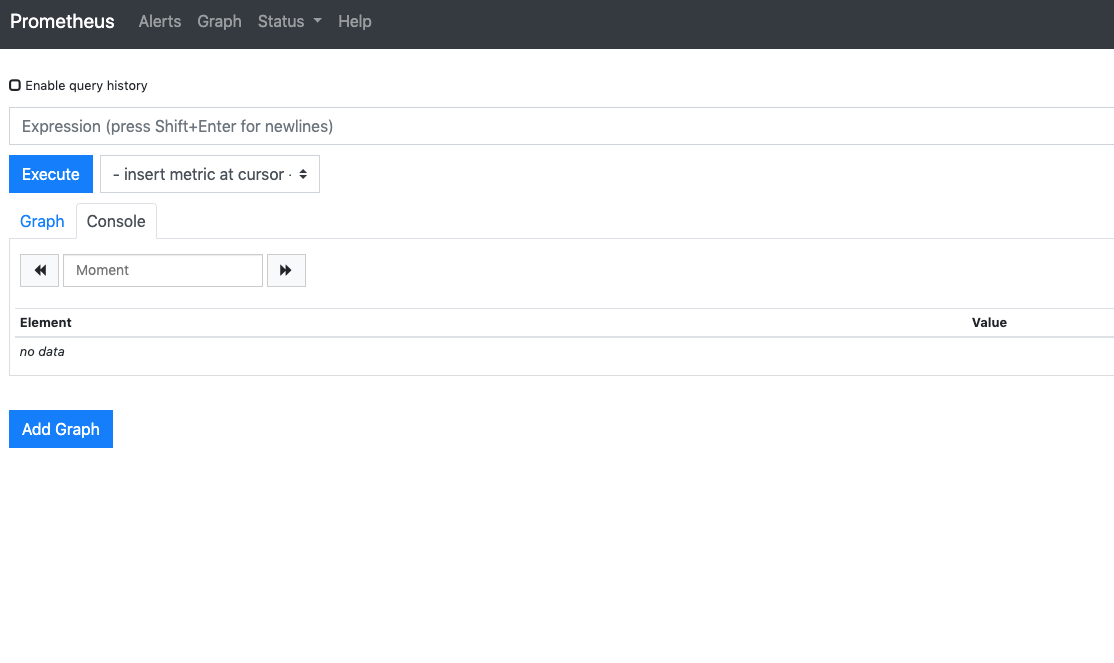 From here you can use PromQL, the Prometheus query language, to select and aggregate time series metrics stored in its database. To learn more about PromQL, consult Querying Prometheus from the official Prometheus docs.

Finally, in the top navigation bar, click on Status and then Targets to see the list of targets Prometheus has been configured to scrape. You should see a list of targets corresponding to the list of monitoring endpoints described at the beginning of Step 2.

To learn more about Prometheus and how to query your cluster metrics, consult the official Prometheus docs.

To connect to Alertmanager, which manages Alerts generated by Prometheus, we'll follow a similar process to what we used to connect to Prometheus. . In general, you can explore Alertmanager Alerts by clicking into Alerts in the Prometheus top navigation bar.

To connect to the Alertmanager Pods, we will once again use kubectl port-forward to forward a local port. If you’re done exploring Prometheus, you can close the port-forward tunnel by hitting CTRL-Cor open a new shell to create a new connection. .

We are going to forward local port 9093 to port 9093 of the sammy-cluster-monitoring-alertmanager-0 Pod:

This indicates that local port 9093 is being forwarded successfully to an Alertmanager Pod.

Visit http://localhost:9093 in your web browser. You should see the following Alertmanager Alerts page:

From here, you can explore firing alerts and optionally silencing them. To learn more about Alertmanager, consult the official Alertmanager documentation.

In the next step, you'll learn how to optionally configure and scale some of the monitoring stack components.

The manifests included in the DigitalOcean Kubernetes Cluster Monitoring Quickstart repository can be modified to use different container images, different numbers of Pod replicas, different ports, and customized configuration files.

In this step, we'll provide a high-level overview of each manifest’s purpose, and then demonstrate how to scale Prometheus up to 3 replicas by modifying the master manifest file.

To begin, navigate into the manifests subdirectory in the repo, and list the directory’s contents:

Here you'll find manifests for the different monitoring stack components. To learn more about specific parameters in the manifests, click into the links and consult the comments included throughout the YAML files:

To demonstrate how to modify the monitoring stack, we'll scale the number of Prometheus replicas from 2 to 3.

Scroll down to the Prometheus StatefulSet section of the manifest:

Change the number of replicas from 2 to 3:

When you're done, save and close the file.

You can track progress using kubectl get pods. Using this same technique, you can update many of the Kubernetes parameters and much of the configuration for this observability stack.

In this tutorial, you installed a Prometheus, Grafana, and Alertmanager monitoring stack into your DigitalOcean Kubernetes cluster with a standard set of dashboards, Prometheus rules, and alerts.

You may also choose to deploy this monitoring stack using the Helm Kubernetes package manager. To learn more, consult How to Set Up DigitalOcean Kubernetes Cluster Monitoring with Helm and Prometheus. One additional way to get this stack up and running is to use the DigitalOcean Marketplace Kubernetes Monitoring Stack solution, currently in beta.

The DigitalOcean Kubernetes Cluster Monitoring Quickstart repository is heavily based on and modified from Google Cloud Platform’s click-to-deploy Prometheus solution. A full manifest of modifications and changes from the original repository can be found in the Quickstart repo’s changes.md file.