A Docker registry is a storage and content delivery system for named Docker images, which are the industry standard for containerized applications. A private Docker registry allows you to securely share your images within your team or organization with more flexibility and control when compared to public ones. By hosting your private Docker registry directly in your Kubernetes cluster, you can achieve higher speeds, lower latency, and better availability, all while having control over the registry.

The underlying registry storage is delegated to external drivers. The default storage system is the local filesystem, but you can swap this for a cloud-based storage driver. DigitalOcean Spaces is an S3-compatible object storage designed for developer teams and businesses that want a scalable, simple, and affordable way to store and serve vast amounts of data, and is very suitable for storing Docker images. It has a built-in CDN network, which can greatly reduce latency when frequently accessing images.

Before you begin this tutorial, you'll need:

In this step, you will create a configuration file for the registry deployment and install the Docker registry to your cluster with the given config using the Helm package manager.

During the course of this tutorial, you will use a configuration file called chart_values.yaml to override some of the default settings for the Docker registry Helm chart. Helm calls its packages, charts; these are sets of files that outline a related selection of Kubernetes resources. You'll edit the settings to specify DigitalOcean Spaces as the underlying storage system and enable HTTPS access by wiring up Let's Encrypt TLS certificates.

As part of the prerequisite, you would have created the echo1 and echo2 services and an echo_ingress ingress for testing purposes; you will not need these in this tutorial, so you can now delete them.

Start off by deleting the ingress by running the following command:

Then, delete the two test services:

The kubectl delete command accepts the file to delete when passed the -f parameter.

Create a folder that will serve as your workspace:

Navigate to it by running:

Add the following lines, ensuring you replace the highlighted lines with your details:

The first block, ingress, configures the Kubernetes Ingress that will be created as a part of the Helm chart deployment. The Ingress object makes outside HTTP/HTTPS routes point to internal services in the cluster, thus allowing communication from the outside. The overridden values are:

Then, you set the file system storage to s3 — the other available option would be filesystem. Here s3 indicates using a remote storage system compatible with the industry-standard Amazon S3 API, which DigitalOcean Spaces fulfills.

In the next block, secrets, you configure keys for accessing your DigitalOcean Space under the s3 subcategory. Finally, in the s3 block, you configure the parameters specifying your Space.

Save and close your file.

Now, if you haven't already done so, set up your A records to point to the Load Balancer you created as part of the Nginx Ingress Controller installation in the prerequisite tutorial. To see how to set your DNS on DigitalOcean, see How to Manage DNS Records.

Next, ensure your Space isn't empty. The Docker registry won't run at all if you don't have any files in your Space. To get around this, upload a file. Navigate to the Spaces tab, find your Space, click the Upload File button, and upload any file you'd like. You could upload the configuration file you just created. 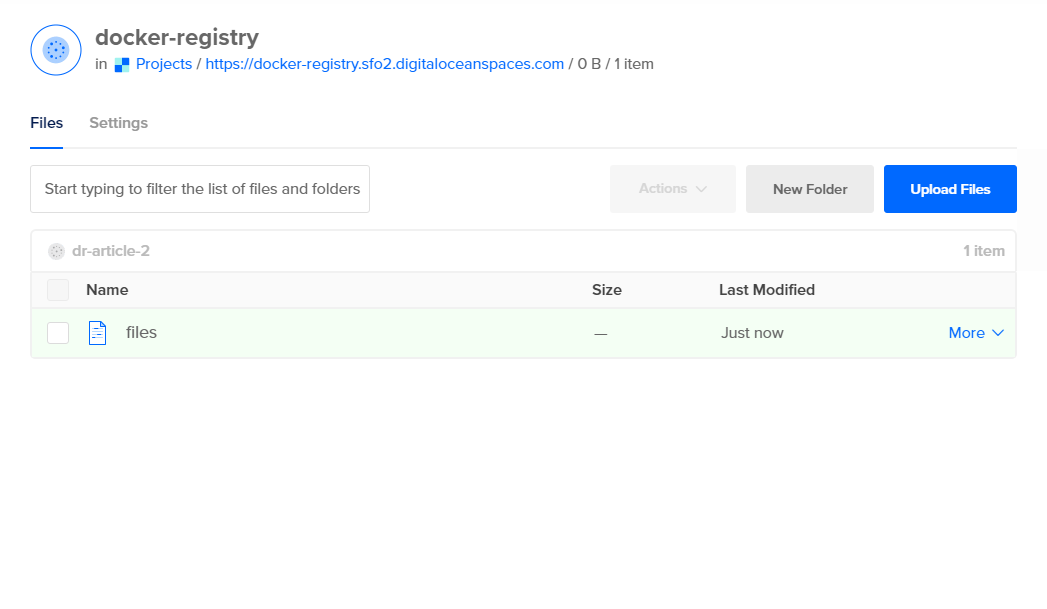 Before installing anything via Helm, you need to refresh its cache. This will update the latest information about your chart repository. To do this run the following command:

Now, you'll deploy the Docker registry chart with this custom configuration via Helm by running:

Helm lists all the resources it created as a result of the Docker registry chart deployment. The registry is now accessible from the domain name you specified earlier.

In this step, you'll test your newly deployed Docker registry by pushing and pulling images to and from it. Currently, the registry is empty. To have something to push, you need to have an image available on the machine you're working from. Let's use the mysql Docker image.

Start off by pulling mysql from the Docker Hub:

You now have the image available locally. To inform Docker where to push it, you'll need to tag it with the host name, like so:

Then, push the image to the new registry:

This command will run successfully and indicate that your new registry is properly configured and accepting traffic — including pushing new images. If you see an error, double check your steps against steps 1 and 2.

To test pulling from the registry cleanly, first delete the local mysql images with the following command:

Then, pull it from the registry:

This command will take a few seconds to complete. If it runs successfully, that means your registry is working correctly. If it shows an error, double check what you have entered against the previous commands.

You can list Docker images available locally by running the following command:

You'll see output listing the images available on your local machine, along with their ID and date of creation.

Your Docker registry is configured. You've pushed an image to it and verified you can pull it down. Now let's add authentication so only certain people can access the code.

In this step, you'll set up username and password authentication for the registry using the htpasswd utility.

The htpasswd utility comes from the Apache webserver, which you can use for creating files that store usernames and passwords for basic authentication of HTTP users. The format of htpasswd files is username:hashed_password (one per line), which is portable enough to allow other programs to use it as well.

To make htpasswd available on the system, you'll need to install it by running:

Note:
If you're running this tutorial from a Mac, you'll need to use the following command to make htpasswd available on your machine:

Create it by executing the following command:

Docker requires the password to be hashed using the bcrypt algorithm, which is why we pass the -B parameter. The bcrypt algorithm is a password hashing function based on Blowfish block cipher, with a work factor parameter, which specifies how expensive the hash function will be.

Remember to replace username with your desired username. When run, htpasswd will ask you for the accompanying password and add the combination to htpasswd_file. You can repeat this command for as many users as you wish to add.

Now, show the contents of htpasswd_file by running the following command:

Select and copy the contents shown.

To add authentication to your Docker registry, you'll need to edit chart_values.yaml and add the contents of htpasswd_file in the htpasswd variable.

Edit it to match the following, replacing htpasswd_file_contents with the contents you copied from the htpasswd_file:

Be careful with the indentation, each line of the file contents must have four spaces before it.

Once you've added your contents, save and close the file.

To propagate the changes to your cluster, run the following command:

The output will be similar to that shown when you first deployed your Docker registry:

This command calls Helm and instructs it to upgrade an existing release, in your case docker-registry, with its chart defined in stable/docker-registry in the chart repository, after applying the chart_values.yaml file.

Now, you'll try pulling an image from the registry again:

It correctly failed because you provided no credentials. This means that your Docker registry authorizes requests correctly.

To log in to the registry, run the following command:

To test the login, you can try to pull again by running the following command:

The output will look similar to the following:

You've now configured Docker and can log in securely. To configure Kubernetes to log in to your registry, run the following command:

This command creates a secret in your cluster with the name regcred, takes the contents of the JSON file where Docker stores the credentials, and parses it as dockerconfigjson, which defines a registry credential in Kubernetes.

You've used htpasswd to create a login config file, configured the registry to authenticate requests, and created a Kubernetes secret containing the login credentials. Next, you will test the integration between your Kubernetes cluster and registry.

In this step, you'll run a sample deployment with an image stored in the in-cluster registry to test the connection between your Kubernetes cluster and registry.

You can specify which secret Kubernetes should use when pulling containers in the pod definition by specifying imagePullSecrets. This step is necessary when the Docker registry requires authentication.

You'll now deploy a sample Hello World image from your private Docker registry to your cluster. First, in order to push it, you'll pull it to your machine by running the following command:

Then, tag it by running:

Finally, push it to your registry:

Delete it from your machine as you no longer need it locally:

Next, you'll define a Service and an Ingress to make the app accessible to outside of the cluster. Add the following lines, replacing the highlighted lines with your domains:

First, you define the Ingress for the Hello World deployment, which you will route through the Load Balancer that the Nginx Ingress Controller owns. Then, you define a service that can access the pods created in the deployment. In the actual deployment spec, you specify the image as the one located in your registry and set imagePullSecrets to regcred, which you created in the previous step.

Save and close the file. To deploy this to your cluster, run the following command:

You can now navigate to your test domain — the second A record, k8s-test.example.com in this tutorial. You will see the Kubernetes Hello world! page. 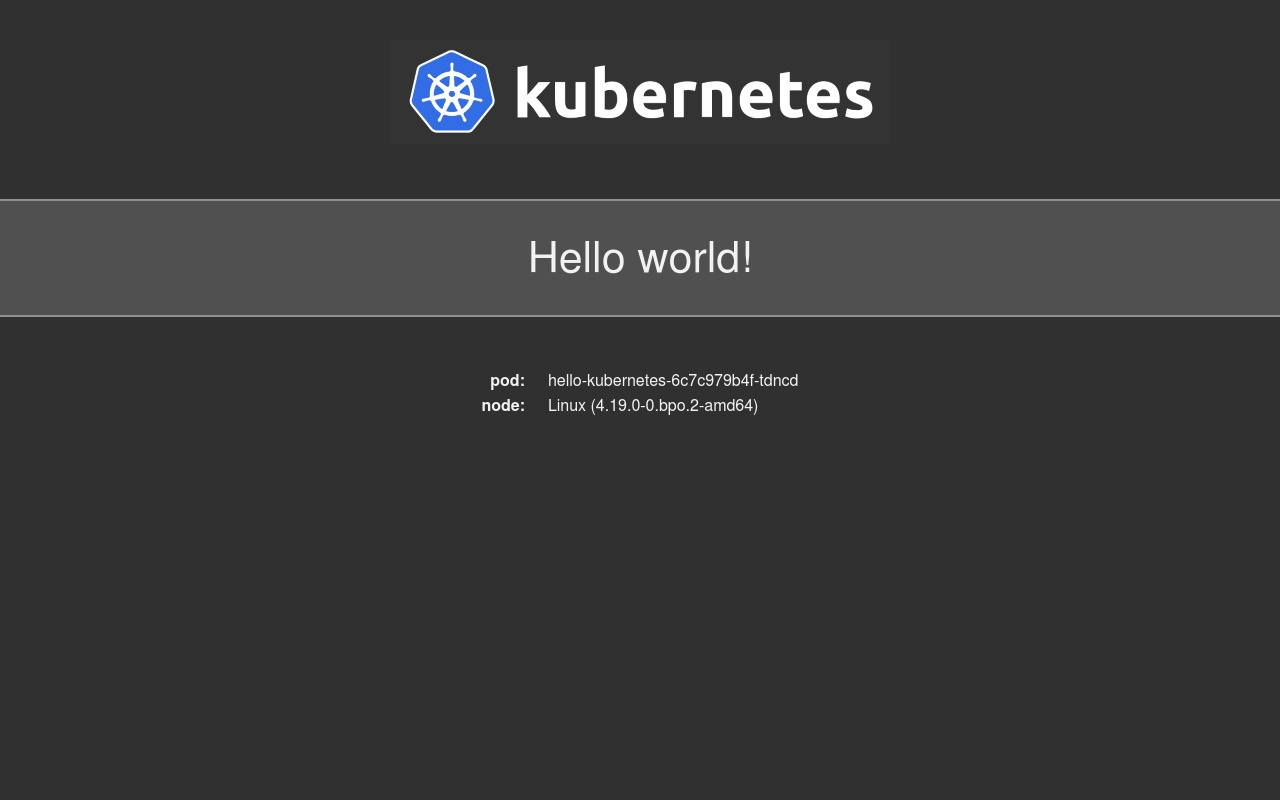 The Hello World page lists some environment information, like the Linux kernel version and the internal ID of the pod the request was served from. You can also access your Space via the web interface to see the images you've worked with in this tutorial.

If you want to delete this Hello World deployment after testing, run the following command:

You've created a sample Hello World deployment to test if Kubernetes is properly pulling images from your private registry.

You have now successfully deployed your own private Docker registry on your DigitalOcean Kubernetes cluster, using DigitalOcean Spaces as the storage layer underneath. There is no limit to how many images you can store, Spaces can extend infinitely, while at the same time providing the same security and robustness. In production, though, you should always strive to optimize your Docker images as much as possible, take a look at the How To Optimize Docker Images for Production tutorial.