The author selected the Mozilla Foundation to receive a donation as part of the Write for DOnations program.

Ansible is an agentless configuration management tool that uses YAML templates to define a list of tasks to be performed on hosts. In Ansible, roles are a collection of variables, tasks, files, templates and modules that are used together to perform a singular, complex function.

Molecule is a tool for performing automated testing of Ansible roles, specifically designed to support the development of consistently well-written and maintained roles. Molecule's unit tests allow developers to test roles simultaneously against multiple environments and under different parameters. It's important that developers continuously run tests against code that often changes; this workflow ensures that roles continue to work as you update code libraries. Running Molecule using a continuous integration tool, like Travis CI, allows for tests to run continuously, ensuring that contributions to your code do not introduce breaking changes.

In this tutorial, you will use a pre-made base role that installs and configures an Apache web server and a firewall on Ubuntu and CentOS servers. Then, you will initialize a Molecule scenario in that role to create tests and ensure that the role performs as intended in your target environments. After configuring Molecule, you will use Travis CI to continuously test your newly created role. Every time a change is made to your code, Travis CI will run molecule test to make sure that the role still performs correctly.

Before you begin this tutorial, you will need:

Step 1 — Forking the Base Role Repository

You will be using a pre-made role called ansible-apache that installs Apache and configures a firewall on Debian- and Red Hat-based distributions. You will fork and use this role as a base and then build Molecule tests on top of it. Forking allows you to create a copy of a repository so you can make changes to it without tampering with the original project.

Once you have forked the repository, GitHub will lead you to your fork's page. This will be a copy of the base repository, but on your own account.

Click on the green Clone or Download button and you'll see a box with Clone with HTTPS.

Copy the URL shown for your repository. You'll use this in the next step. The URL will be similar to this:

You will replace username with your GitHub username.

With your fork set up, you will clone it on your server and begin preparing your role in the next section.

First, activate the virtual environment you created while following the prerequisites by running:

Run the following command to clone the repository using the URL you just copied in Step 1:

Your output will look similar to the following:

Move into the newly created directory:

The base role you've downloaded performs the following tasks:

Now that you have an understanding of how this role works, you will configure Molecule to test it. You will write test cases for these tasks that cover the changes they make.

To check that your base role performs its tasks as intended, you will start a Molecule scenario, specify your target environments, and create three custom test files.

Begin by initializing a Molecule scenario for this role using the following command:

You will add CentOS and Ubuntu as your target environments by including them as platforms in your Molecule configuration file. To do this, edit the molecule.yml file using a text editor:

Add the following highlighted content to the Molecule configuration:

Here, you're specifying two target platforms that are launched in privileged mode since you're working with systemd services:

Save and exit the file.

Instead of using the default Molecule test file, you will be creating three custom test files, one for each target platform, and one file for writing tests that are common between all platforms. Start by deleting the scenario's default test file test_default.py with the following command:

You can now move on to creating the three custom test files, test_common.py, test_Debian.py, and test_RedHat.py for each of your target platforms.

Add the following code to the file:

In your test_common.py file, you have imported the required libraries. You have also written a test called test_files(), which holds the only common task between distributions that your role performs: copying your template as the web servers homepage.

The next test file, test_Debian.py, holds tests specific to Debian distributions. This test file will specifically target your Ubuntu platform.

Create and edit the Ubuntu test file by running the following command:

You can now import the required libraries and define the ubuntu18 platform as the target host. Add the following code to the start of this file:

Then, in the same file, you'll add test_pkg() test.

Add the following code to the file, which defines the test_pkg() test:

This test will check if apache2 and ufw packages are installed on the host.

Note: When adding multiple tests to a Molecule test file, make sure there are two blank lines between each test or you'll get a syntax error from Molecule.

To define the next test, test_svc(), add the following code under the test_pkg() test in your file:

test_svc() will check if the apache2 and ufw services are running and enabled.

Finally you will add your last test, test_ufw_rules(), to the test_Debian.py file.

Add this code under the test_svc() test in your file to define test_ufw_rules():

test_ufw_rules() will check that your firewall configuration permits traffic on the port used by the Apache service.

With each of these tests added, your test_Debian.py file will look like this:

Next you'll create the test_RedHat.py test file, which will contain tests specific to Red Hat distributions to target your CentOS platform.

Create and edit the CentOS test file, test_RedHat.py, by running the following command:

Similarly to the Ubuntu test file, you will now write three tests to include in your test_RedHat.py file. Before adding the test code, you can import the required libraries and define the centos7 platform as the target host, by adding the following code to the beginning of your file:

Then, add the test_pkg() test, which will check if the httpd and firewalld packages are installed on the host.

Following the code for your library imports, add the test_pkg() test to your file. (Again, remember to include two blank lines before each new test.)

Now, you can add the test_svc() test to ensure that httpd and firewalld services are running and enabled.

Add the test_svc() code to your file following the test_pkg() test:

The final test in test_RedHat.py file will be test_firewalld(), which will check if Firewalld has the http service whitelisted.

Add the test_firewalld() test to your file after the test_svc() code:

After importing the libraries and adding the three tests, your test_RedHat.py file will look like this:

Now that you've completed writing tests in all three files, test_common.py, test_Debian.py, and test_RedHat.py, your role is ready for testing. In the next step, you will use Molecule to run these tests against your newly configured role.

Step 4 — Testing Against Your Role

You will now execute your newly created tests against the base role ansible-apache using Molecule. To run your tests, use the following command:

You'll see the following output once Molecule has finished running all the tests:

You'll see Verifier completed successfully in your output; this means that the verifier executed all of your tests and returned them successfully.

Now that you've successfully completed the development of your role, you can commit your changes to Git and set up Travis CI for continuous testing.

In this tutorial, so far, you have cloned a role called ansible-apache and added tests to it to make sure it works against Ubuntu and CentOS hosts. To share your updated role with the public, you must commit these changes and push them to your fork.

Run the following command to add the files and commit the changes you've made:

This command will add all the files that you have modified in the current directory to the staging area.

You also need to set your name and email address in the git config in order to commit successfully. You can do so using the following commands:

Commit the changed files to your repository:

This signifies that you have committed your changes successfully. Now, push these changes to your fork with the following command:

You will see a prompt for your GitHub credentials. After entering these credentials, your code will be pushed to your repository and you'll see this output:

If you go to your fork's repository at github.com/username/ansible-apache, you'll see a new commit called Configured Molecule reflecting the changes you made in the files.

Now, you can integrate Travis CI with your new repository so that any changes made to your role will automatically trigger Molecule tests. This will ensure that your role always works with Ubuntu and CentOS hosts.

In this step, you're going to integrate Travis CI into your workflow. Once enabled, any changes you push to your fork will trigger a Travis CI build. The purpose of this is to ensure Travis CI always runs molecule test whenever contributors make changes. If any breaking changes are made, Travis will declare the build status as such.

Proceed to Travis CI to enable your repository. Navigate to your profile page where you can click the Activate button for GitHub.

You can find further guidance here on activating repositories in Travis CI.

To duplicate the environment you've created in this tutorial, you will specify parameters in the Travis configuration file. Add the following content to your file:

The parameters you've specified in this file are:

The reason you specify molecule --version and ansible --version is to catch errors in case the build fails as a result of ansible or molecule misconfiguration due to versioning.

Once you've added the content to the Travis CI configuration file, save and exit .travis.yml.

Now, every time you push any changes to your repository, Travis CI will automatically run a build based on the above configuration file. If any of the commands in the script block fail, Travis CI will report the build status as such.

Add the following line to the README.md to display the build status:

Replace username with your GitHub username. Commit and push the changes to your repository as you did earlier.

First, run the following command to add .travis.yml and README.md to the staging area:

Now commit the changes to your repository by executing:

Finally, push these changes to your fork with the following command:

If you navigate over to your GitHub repository, you will see that it initially reports build: unknown. 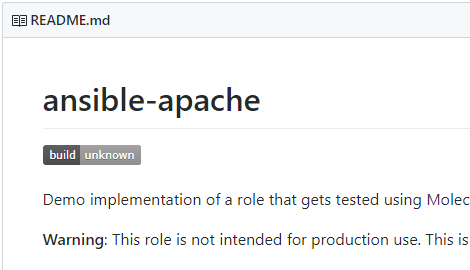 Within a few minutes, Travis will initiate a build that you can monitor at the Travis CI website. Once the build is a success, GitHub will report the status as such on your repository as well — using the badge you've placed in your README file: 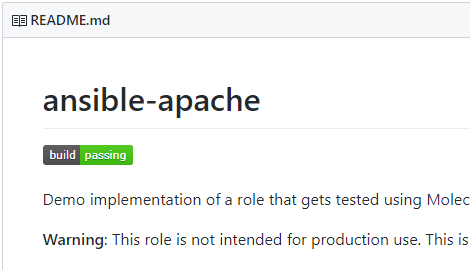 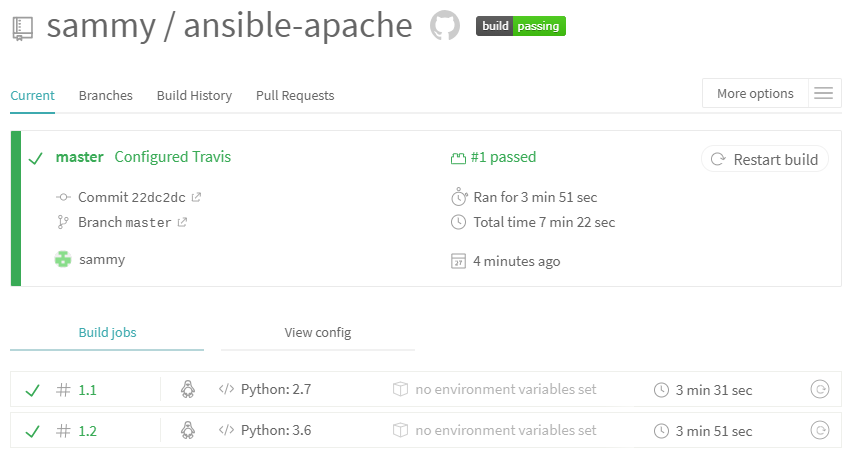 Now that you've successfully set up Travis CI for your new role, you can continuously test and integrate changes to your Ansible roles.

In this tutorial, you forked a role that installs and configures an Apache web server from GitHub and added integrations for Molecule by writing tests and configuring these tests to work on Docker containers running Ubuntu and CentOS. By pushing your newly created role to GitHub, you have allowed other users to access your role. When there are changes to your role by contributors, Travis CI will automatically run Molecule to test your role.

Once you're comfortable with the creation of roles and testing them with Molecule, you can integrate this with Ansible Galaxy so that roles are automatically pushed once the build is successful.