When introducing new versions of a service, it is often desirable to shift a controlled percentage of user traffic to a newer version of the service in the process of phasing out the older version. This technique is called a canary deployment.

Kubernetes cluster operators can orchestrate canary deployments natively using labels and Deployments. This technique has certain limitations, however: traffic distribution and replica counts are coupled, which in practice means replica ratios must be controlled manually in order to limit traffic to the canary release. In other words, to direct 10% of traffic to a canary deployment, you would need to have a pool of ten pods, with one pod receiving 10% of user traffic, and the other nine receiving the rest.

Deploying with an Istio service mesh can address this issue by enabling a clear separation between replica counts and traffic management. The Istio mesh allows fine-grained traffic control that decouples traffic distribution and management from replica scaling. Instead of manually controlling replica ratios, you can define traffic percentages and targets, and Istio will manage the rest.

In this tutorial, you will create a canary deployment using Istio and Kubernetes. You will deploy two versions of a demo Node.js application, and use Virtual Service and Destination Rule resources to configure traffic routing to both the newer and older versions. This will be a good starting point to build out future canary deployments with Istio.

Note: We highly recommend a cluster with at least 8GB of available memory and 4vCPUs for this setup. This tutorial will use three of DigitalOcean's standard 4GB/2vCPU Droplets as nodes.

In the prerequisite tutorial, How To Install and Use Istio With Kubernetes, you created a node-demo Docker image to run a shark information application and pushed this image to Docker Hub. In this step, you will create another image: a newer version of the application that you will use for your canary deployment.

Our original demo application emphasized some friendly facts about sharks on its Shark Info page: 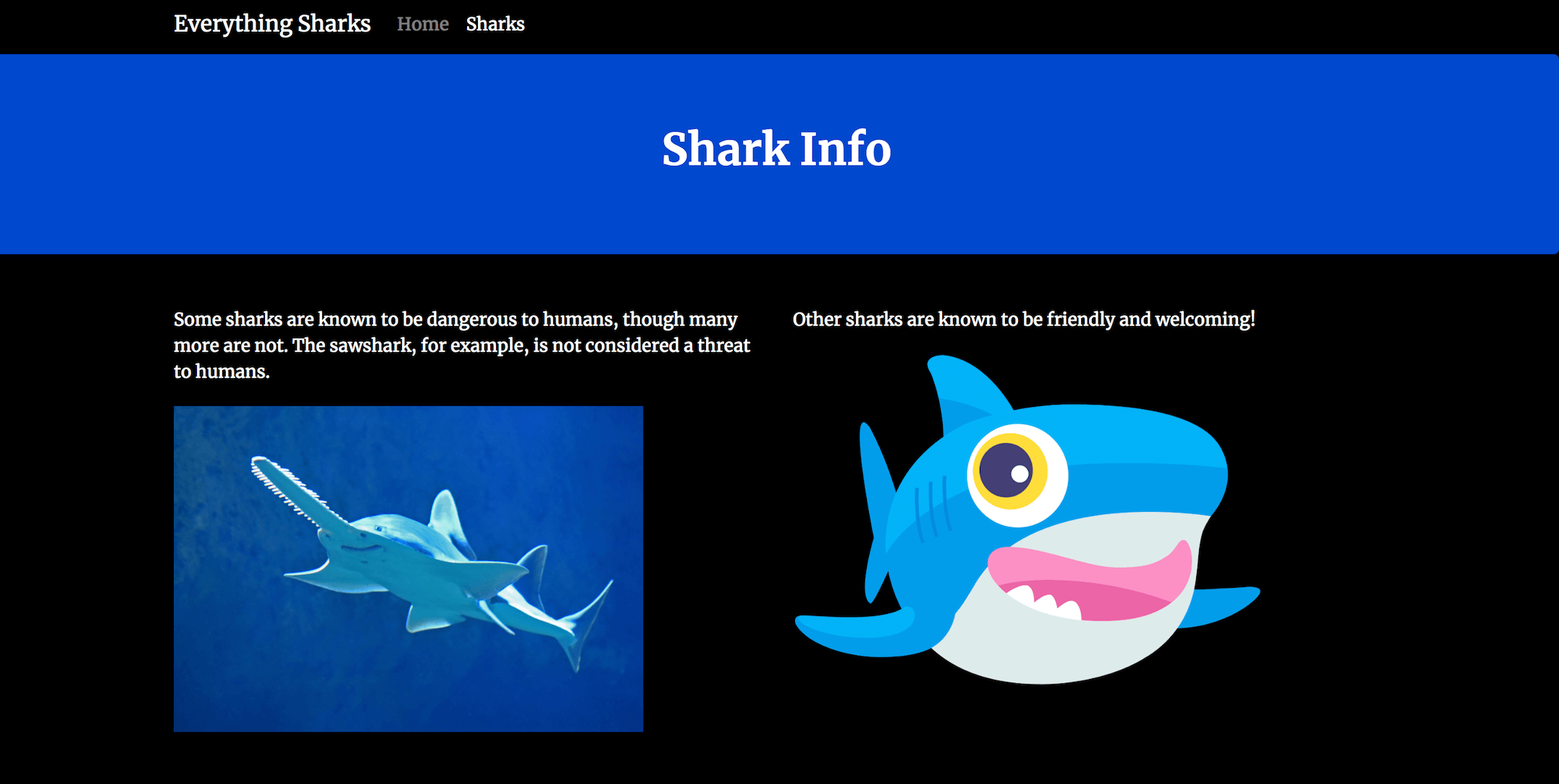 But we have decided in our new canary version to emphasize some scarier facts: 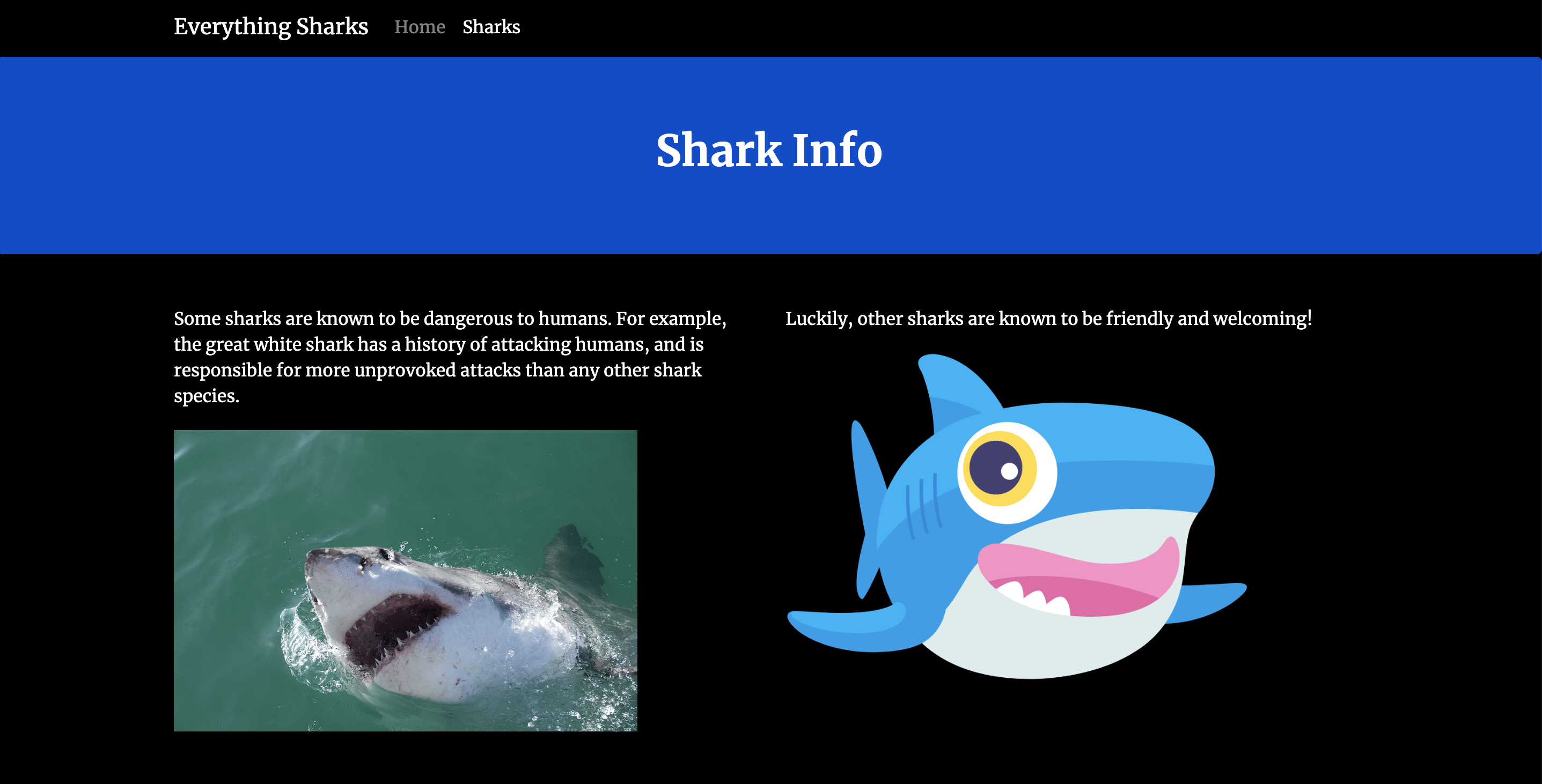 Navigate to the node_image directory:

To test that the application code and Dockerfile work as expected, you can build and tag the image using the docker build command, and then use the image to run a demo container. Using the -t flag with docker build will allow you to tag the image with your Docker Hub username so that you can push it to Docker Hub once you've tested it.

Build the image with the following command:

The . in the command specifies that the build context is the current directory. We've named the image node-demo-v2, to reference the node-demo image we created in How To Install and Use Istio With Kubernetes.

Once the build process is complete, you can list your images with docker images:

You will see the following output confirming the image build:

Next, you'll use docker run to create a container based on this image. We will include three flags with this command:

Run the following command to build the container:

You will see output confirming that your application container is running:

You can now visit your server IP in your browser to test your setup: http://your_server_ip. Your application will display the following landing page: 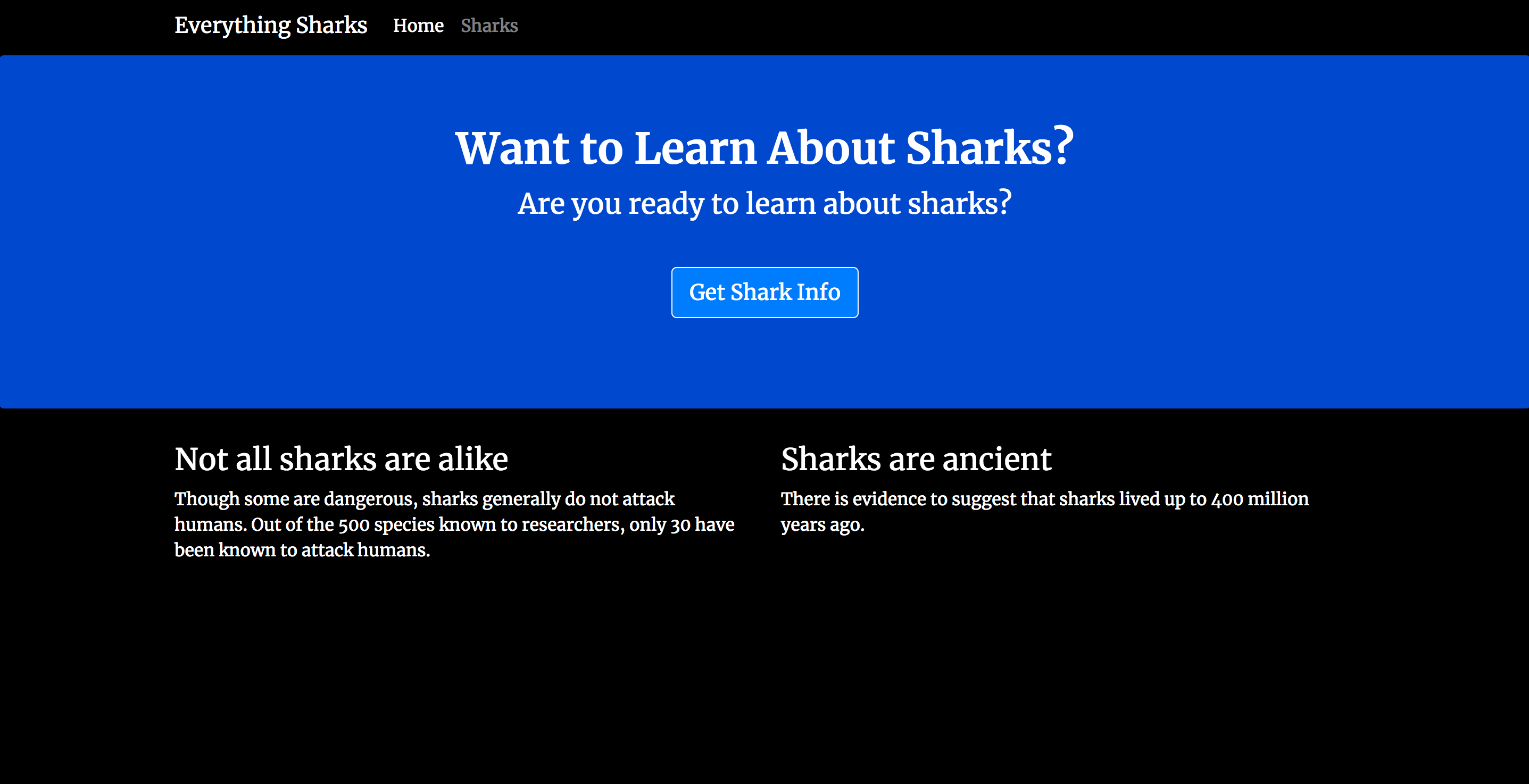 Click on the Get Shark Info button to get to the scarier shark information:

Now that you have tested the application, you can stop the running container. Use docker ps again to get your CONTAINER ID:

Stop the container with docker stop. Be sure to replace the CONTAINER ID listed here with your own application CONTAINER ID:

Now that you have tested the image, you can push it to Docker Hub. First, log in to the Docker Hub account you created in the prerequisites:

When prompted, enter your Docker Hub account password. Logging in this way will create a ~/.docker/config.json file in your non-root user's home directory with your Docker Hub credentials.

Push the application image to Docker Hub with the docker push command. Remember to replace your_dockerhub_username with your own Docker Hub username:

You now have two application images saved to Docker Hub: the node-demo image, and node-demo-v2. We will now modify the manifests you created in the prerequisite tutorial How To Install and Use Istio With Kubernetes to direct traffic to the canary version of your application.

Navigate to the istio_project directory now:

Open node-app.yaml with nano or your favorite editor to make changes to your application manifest:

For a full explanation of this file's contents, see Step 3 of How To Install and Use Istio With Kubernetes.

We have already included version labels in our Deployment metadata and template fields, following Istio's recommendations for Pods and Services. Now we can add specifications for a second Deployment object, which will represent the second version of our application, and make a quick modification to the name of our first Deployment object.

First, change the name of your existing Deployment object to nodejs-v1:

We've also ensured that the Pods managed by the v2 Deployment will run the node-demo-v2 canary image, which we built in the previous Step.

Save and close the file when you are finished editing.

With your application manifest modified, you can move on to making changes to your node-istio.yaml file.

For a complete explanation of the specifications in this manifest, see Step 4 of How To Install and Use Istio With Kubernetes.

Our first modification will be to the Virtual Service. Currently, this resource routes traffic entering the mesh through our nodejs-gateway to our nodejs application Service. What we would like to do is configure a routing rule that will send 80% of traffic to our original application, and 20% to the newer version. Once we are satisfied with the canary's performance, we can reconfigure our traffic rules to gradually send all traffic to the newer application version.

Instead of routing to a single destination, as we did in the original manifest, we will add destination fields for both of our application subsets: the original version (v1) and the canary (v2).

Make the following additions to the Virtual Service to create this routing rule:

Next, we will add a Destination Rule that will apply rules to incoming traffic after that traffic has been routed to the appropriate Service. In our case, we will configure subset fields to send traffic to Pods with the appropriate version labels.

Add the following code below your Virtual Service definition:

Our Rule ensures that traffic to our Service subsets, v1 and v2, reaches Pods with the appropriate labels: version: v1 and version: v2. These are the labels that we included in our application Deployment specs.

Save and close the file when you have finished editing.

The application manifests are updated, but we still need to apply these changes to our Kubernetes cluster. We'll use the kubectl apply command to apply our changes without completely overwriting the existing configuration. After doing this, you will be able to generate some requests to your application and look at the associated data in your Istio Grafana dashboards.

Apply your configuration to your application Service and Deployment objects:

Next, apply the configuration updates you've made to node-istio.yaml, which include the changes to the Virtual Service and the new Destination Rule:

You are now ready to generate traffic to your application. Before doing that, however, first check to be sure that you have the grafana Service running:

Also check for the associated Pods:

Finally, check for the grafana-gateway Gateway and grafana-vs Virtual Service:

If you don't see output from these commands, check Steps 2 and 5 of How To Install and Use Istio With Kubernetes, which discuss how to enable the Grafana telemetry addon when installing Istio and how to enable HTTP access to the Grafana Service.

You can now access your application in the browser. To do this, you will need the external IP associated with your istio-ingressgateway Service, which is a LoadBalancer Service type. We matched our nodejs-gateway Gateway with this controller when writing our Gateway manifest in How To Install and Use Istio With Kubernetes. For more detail on the Gateway manifest, see Step 4 of that tutorial.

Get the external IP for the istio-ingressgateway Service with the following command:

Navigate to this external IP in your browser: http://ingressgateway_ip.

You should see the following landing page:

Click on Get Shark Info button. You will see one of two shark information pages:

Click refresh on this page a few times. You should see the friendlier shark information page more often than the scarier version.

Once you have generated some load by refreshing five or six times, you can head over to your Grafana dashboards.

In your browser, navigate to the following address, again using your istio-ingressgateway external IP and the port that's defined in the Grafana Gateway manifest: http://ingressgateway_ip:15031.

You will see the following landing page:

Clicking on Home at the top of the page will bring you to a page with an istio folder. To get a list of dropdown options, click on the istio folder icon:

This will bring you to a landing page with another dropdown menu: 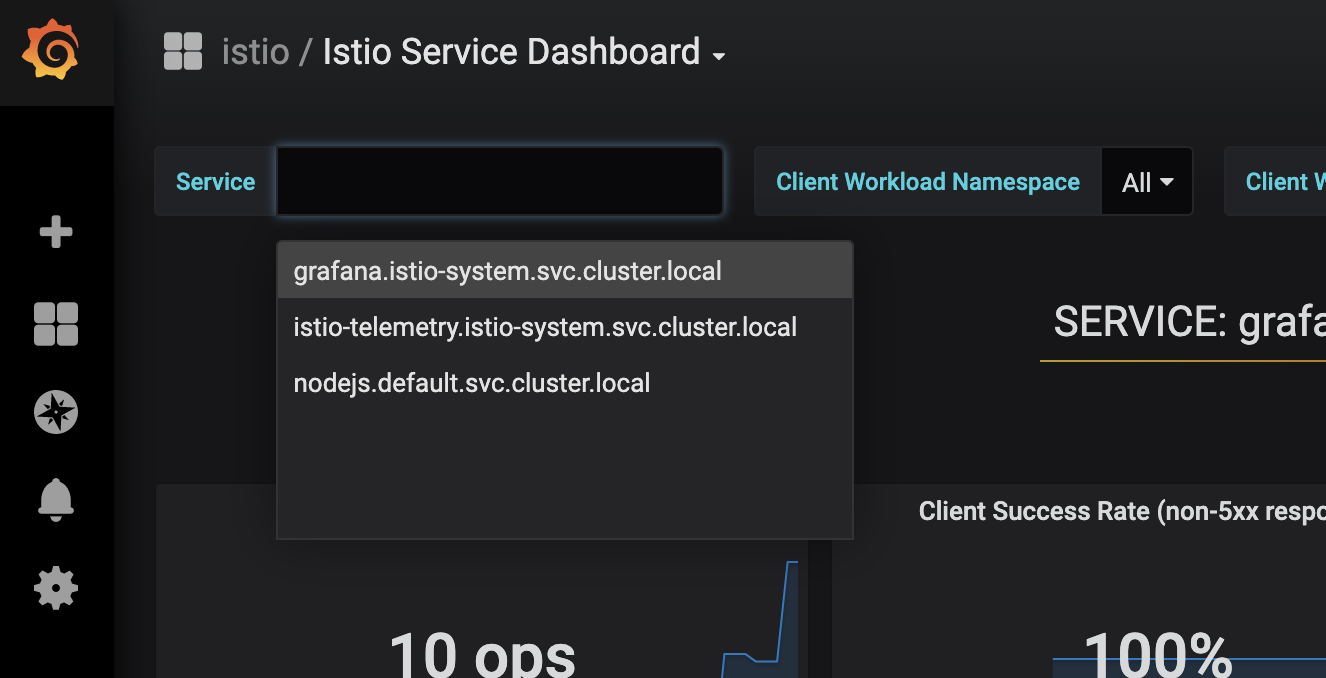 If you navigate down to the Service Workloads section of the page, you will be able to look at Incoming Requests by Destination And Response Code:

In this tutorial, you deployed a canary version of a demo Node.js application using Istio and Kubernetes. You created Virtual Service and Destination Rule resources that together allowed you to send 80% of your traffic to your original application service, and 20% to the newer version. Once you are satisfied with the performance of the newer application version, you can update your configuration settings as desired.

For more information about traffic management in Istio, see the related high-level overview in the documentation, as well as specific examples that use Istio's bookinfo and helloworld sample applications.